The Changing Role Of Women In Computing: Our Top 5 Books 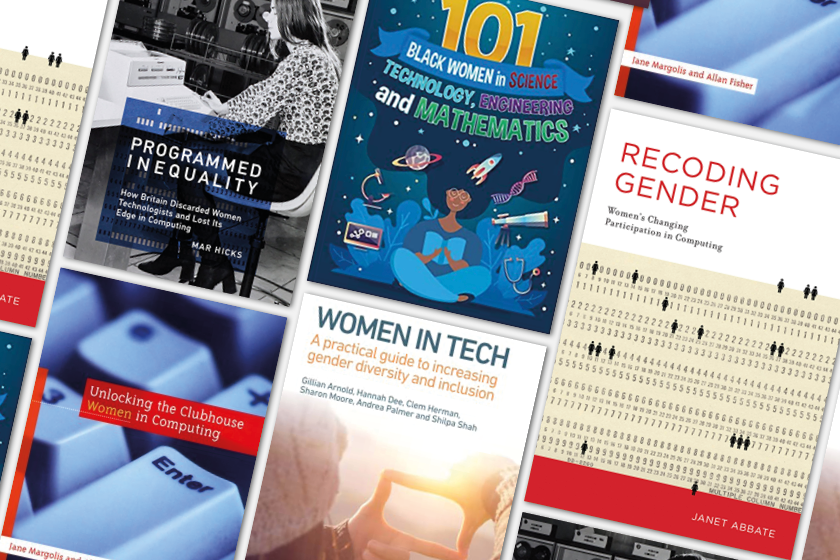 On International Women’s Day, Katharine Childs shares some of her book recommendations that delve deeper into the history of gender balance in computing and may inspire you to consider actions to shift the balance.

Computer Science is the fastest-growing subject for university students in the UK in 2022. Yet the subject still has one of the largest gender imbalances; only 19% of applicants in 2022 at undergraduate level were women. The Gender Balance in Computing research programme is exploring ways to increase the number of women engaged in formal computing education. Our results are due to be published throughout 2022 and beyond. Here are five books the team has been reading if you are interested in finding out more about the topic right now.

Programmed Inequality: How Britain Discarded Women Technologists and Lost Its Edge in Computing, by Marie Hicks

This book provides a detailed commentary of the two core strands of computing history from 1930 - 1979. In 1944, Britain had a world-leading computing industry, but by 1974, this sector had almost entirely vanished. During the same time, working as a computer programmer shifted from a job that could be done by men and women, to a male-dominated profession. The causes of these changes are explained using primary sources such as government files, the archives of British computing companies and personal interviews.

From a 21st century standpoint, it can be difficult to imagine how women were perceived in society during the mid 20th century. I think the use of authentic adverts and photographs of computing in the workplace provide a powerful illustration of the (now considered problematic) way that women were categorised as low-skilled, clerical workers who were best suited to data entry tasks, and really show how political and social narratives reinforced stereotypes.

Key takeaway:  Stereotypical views about who can succeed in computing limit opportunities for a more diverse workforce and it is important to learn from history and make sure these are not repeated.

Women in Tech: A practical guide to increasing gender diversity and inclusion, by Arnold, Dee, Herman, Moore, Palmer and Shah

As the title suggests, this book is packed full of realistic and useful ideas to promote tech subjects and careers equitably and inclusively in schools, higher education and workplaces. The authors draw on a mixture of research and policy to illustrate how initiatives have been tested and developed. Each chapter then signposts a number of practical resources, and uses case studies to explore how to deliver these in education or industry. An example I found helpful is the chapter on unconscious bias, which begins by unpacking key terminology, explaining important theories and providing examples of research studies which have informed current thinking. The chapter then finishes with a number of recommendations that both organisations and individuals can implement to overcome unconscious bias.

Key takeaway: Schools, universities and workplaces have a number of different initiatives, resources and toolkits that they can use to promote computing to a diverse audience in order to increase the engagement of women and girls.

Unlocking the Clubhouse, by Jane Margolis and Allan Fisher

This seminal work summarises the research that Margolis and Fisher undertook at Carnegie Mellon University that increased the number of female computing students from 7% in 1995 to 42% in 2000. Quotes from girls and women in computing education are interwoven throughout the book, and I found these first-hand thoughts and lived experiences really highlight and shape the need for change. The authors describe how their efforts covered a wide range of different approaches including targeted campaigns to recruit girls into computer science courses, adaptations to teaching and learning and providing thoughtful challenges to make classrooms more inclusive. These initiatives took place not only in the university but also in collaboration with teachers at nearby schools to create a pipeline of increasing numbers of female students.

Key takeaway: Increasing the number of girls and women choosing to study computing at a school or university requires sustained, repeated and wide-ranging initiatives.

You’ve probably heard of computing entrepreneurs Bill Gates and Steve Jobs. But how about Stephanie Shirley? Or Elsie Shutt? In part of this book, computing history is presented through the lens of social entrepreneurship, describing Shirley’s and Shutt’s work to establish their own software development businesses which included opportunities for part-time, home-based work for women. This innovative business model is often underrepresented in computing history accounts, which in turn reaffirms the narrative that successful computer scientists worked in an office on a full-time contract, often with long hours spent puzzling over problems. By shining a spotlight on examples such as Shirley and Shutt, this book shifts the historical tech narrative by providing alternative accounts of success defined by equality, not profit.

Key takeaway:  We can make computing a more representative subject by carefully considering how we present computing history, who is included and what values are described as important.

101 Black Women in Science, Technology, Engineering, and Mathematics: Leaders in Black History, by L A Amber

Women of colour face increased barriers in accessing tech opportunities due to their position at the intersection of race and gender. By telling the stories of women who have succeeded in STEM careers, this book presents a series of role models who can inspire the next generation to see computing as a subject where they belong. As well as more familiar names such as Katherine Johnson and Anne-Marie Imafidon, there are less well-known individuals such as software engineer Nyalleng Moorosi and computer scientist Valerie E Taylor. This book is written for children, and includes explanations of STEM vocabulary and prompts to consider  STEM careers - but I think it is equally appealing for adults too.

Key takeaway: There is a rich and diverse set of examples to draw on when talking about famous computer scientists and engineers, and we need to share these with children and young people so that they see themselves represented in STEM careers.