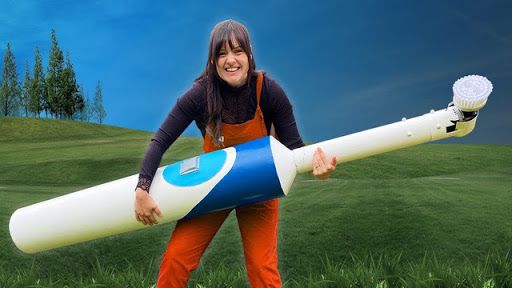 Continuing our International Women’s Day celebrations, we spoke to Ruth Amos who has over 15 years of experience as an inventor, business owner, presenter, and professional YouTuber.

We caught up with Ruth to find out about her passion for making amazing ideas - e.g. giant electric toothbrushes! - and why creating opportunities for children to “invent stuff” is so close to her heart.

Hi Ruth! You run a YouTube channel called Kids Invent Stuff. How did that come about?

I was brought up in a STEM-engaged household, but I never saw myself as an engineer because a lot of the role models were men. I watched shows like Scrapheap Challenge and Robot Wars, but the women on the show were often the presenters. They didn’t make things. The show didn’t seem to represent me, so I decided that I didn’t want young girls to not see themselves in the field and miss out on a fantastic career.

The channel was set up by me and my friend Shawn. We’re both engineers and inventors. If it hadn’t been for early STEM engagement, I might not have become an inventor. I initially wanted to be a lawyer!

What inspired you to do it?

Shawn and I were frustrated because we would see lots of outreach projects that weren’t as engaging as they could be. STEM is important to all our futures, but we could still see groups of women and girls, BAME people, [and] people from disadvantaged groups not being exposed to things that were exciting for them.

We did some research and found that it was vital we engaged primary school children, particularly girls, because it was in that crucial period when children saw themselves reflected for the first time (or not) and were deciding what they were interested in. We knew that YouTube was engaging, and that young people were already on the platform, so it was a good place to meet people who weren’t already interested in STEM and introduce them to it. The idea has always been that the channel would be for outside the classroom. Teachers are some of our biggest supporters, but the idea was always that we’d create the kind of content that a child would choose to watch at home in their own time. So from all these good ideas, Kids Invent Stuff was born!

Why is fostering that sense of creativity and inventiveness important to you?

When we spoke to young people, we found that the terms ‘engineer’ and ‘coder’ had limiting connotations. Using the term ‘inventor’ seemed to be more exciting and liberating for them, so we went with that.

We also choose ideas that adults would think are silly and respond with: “Why would you make a rainbow-coloured unicorn poop jelly beans?!”. We want to show kids that their ideas are valid and exciting. There’s a level of creativity that we lose as adults, but children don't have those barriers. We should celebrate how creative they are for as long as possible.

You recently published a video on YouTube about the “outrageous comments” people make. What challenges did you experience on your journey to becoming a YouTuber and inventor?

When I was 16, I won the Young Engineer for Britain award, and I did a lot of press and was on a national radio programme. One of the first things they said to me was: “You don’t look like an engineer, you look more like you work in media”. They should have known better, but this was a studio full of men and I was 16. I’ve always had strong female role models, so to be presented with the idea that being a girl in STEM could be a negative thing was a shock.

How did you deal with that?

I think I was naive at that age, because the older I get, the more I see these challenges and misconceptions. While I think that YouTube is great, there are also certain things that come with the territory. YouTube Kids works hard to make the platform a safe space, but that doesn’t mean that, as creators, we don’t see things. I am lucky because Shawn and I are a team, and we quickly realised that I would get comments that he wouldn’t. So he’ll now go through and moderate certain comments before I see them. It’s sad that we have to do that.

Yes, the anonymity of the internet seems to embolden people to say whatever they want without worrying about the consequences...

Right. But because people could see that their comments weren’t affecting us, they lost their power. What amazed me was people also left us lots of lovely messages of support on that particular video, so it’s a mixed bag really. I’ve also learnt that if all you’re getting back is positive stuff, you aren’t reaching out far enough. As soon as you branch out, you’re going to get negative feedback.

What has been your proudest moment so far?

Our proudest moments are when we’ve done things where we weren’t experts, weren’t sure it was going to work, and they’ve worked! It’s hard to pick just one because each of the inventions is its own little triumph. There’s a culture of expecting people who create to know everything about what we’re doing. We aren’t experts; we specialise in seeing something wacky and bringing it to life. Girls are often put off by thinking that their knowledge isn’t good enough, but failure is part of the process. Things don't work the first time, and you don't need to know everything to have a career in STEM. There are lots of different people with different skills and neurodiversity, it takes lots of different types of people. You don't have to be a super clever genius.

Why do you think more boys study computer science than girls currently?

I still think a lot of it is around mainstream media and the portrayal of these roles in TV and movies. It’s also important to realise that this has been happening for a while and it’s not going to change overnight. There are a lot of coders and young people who share their career paths on places like YouTube, but people still need to find that content.

What needs to change?

If you can’t get to the people whose perception needs to change, nothing will change. It's about getting to those people and making an impact. As you get older, children may not listen to parents/carers, so it’s about finding new ways to engage them. If you look at someone like Dr Alex from Love Island, a lot of teenagers know him through Love Island — the mainstream — and now get to see what it’s like to be a doctor and hear him talk about mental health and wellbeing.

We first have to capture the attention of those young people at primary ages and keep it. Then we need to link up with people who work in other areas and age groups so we can signpost the young people to the next thing that will keep them engaged when they’ve finished one of our videos. We have two jobs at Kids Invent Stuff, to engage children at primary ages and to continue re-engaging them (which is a lot harder). It’s good news then that someone can be on YouTube watching other content and a video comes up that points them to you or another thing, so you can end up converting people because they’re already on the platform.

What would you say to a girl who is reading this and is thinking about becoming an online creator?

Just have a go! Start, make a project, and have a go at filming it. If you want a laugh, go back and look at our first videos. It’s never perfect. I always wish I’d done this or that thing. What’s important is doing it and putting it out there in a safe way. Even if you just have a go and never put it on YouTube, you will have learnt so much from the process. ‘Making something’ and ‘making something and filming it’ are two very different things. You may find that you just like making it! It’s about having a go and seeing which part of it you enjoy. Find out what works for you.

Want to help the National Centre for Computing Education find out what works for getting more young girls interested in computing? Encourage your school to take part in our Gender Balance in Computing programme.