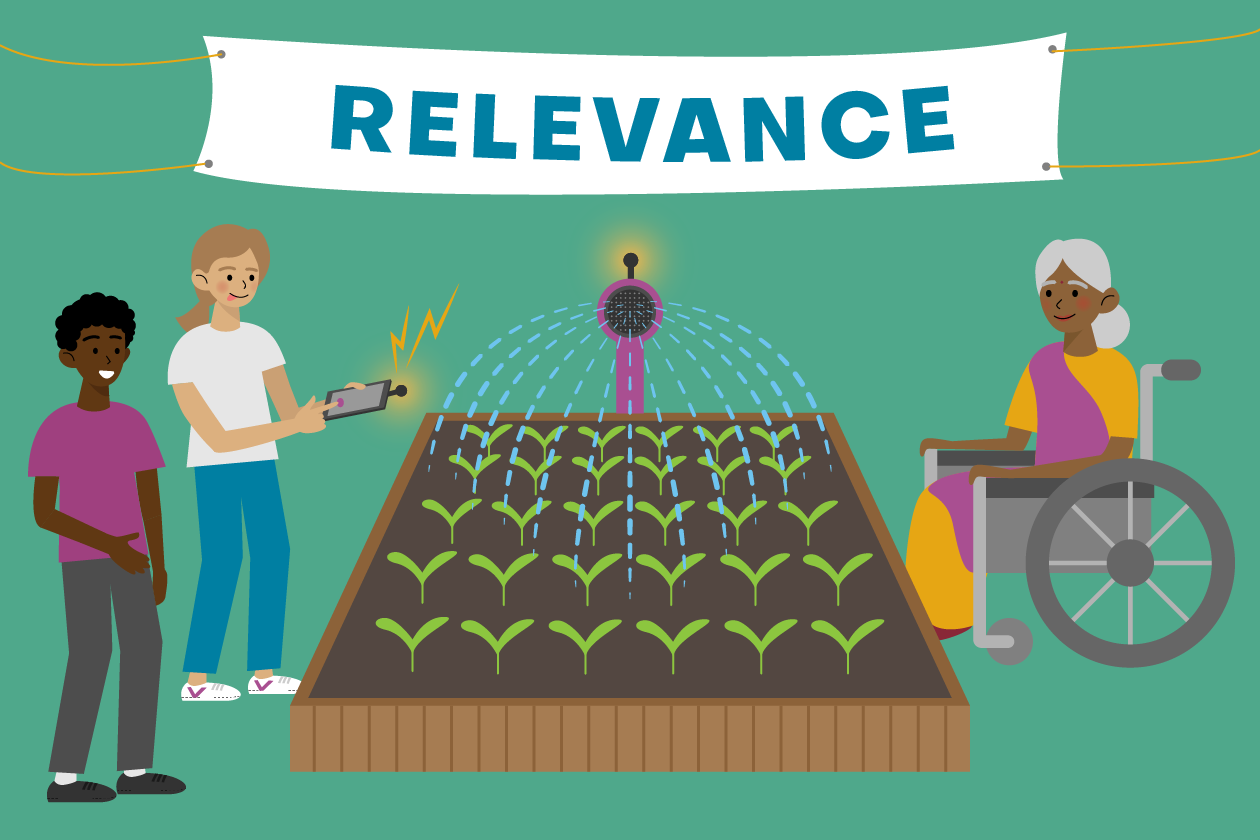 Our Gender Balance in Computing research programme is the largest national effort to date to explore ways to encourage more girls and young women to engage with computing. Intervention design, implementation, and evaluation are conducted via a collaboration between the Raspberry Pi Foundation, the Behavioural Insights Team, Apps for Good, and WISE. The research programme comprises a number of interventions relating to four different research areas and has been running since 2018.

What effect does solving real-world problems with technology have on female pupils' attitudes towards computing? Today we are sharing the results of the Relevance intervention, which was designed to explore answers to this question, and to specifically investigate whether learning about computing in real-world contexts would increase girls’ intention to study GCSE Computer Science.

Details about the study

The Raspberry Pi Foundation and Apps for Good worked together to design a training course for teachers and a series of lessons for Year 8 pupils. Existing research suggests that girls find computing relevant when it helps them to solve problems in their own communities, and so the real-world contexts used in the resources developed for the intervention were based on this finding. During the lessons, teachers supported pupils to understand some common ways that technology can be used to solve real-world problems, and helped them to identify problems in their own lives and communities that could be solved using an app. Pupils worked in groups to develop their technical skills and design, code, and test their own apps in App Lab.

Between January 2022 and April 2022, over 95 schools took part in a study to investigate the effect of the intervention on pupils’ attitudes towards computing. The study was run as a randomised controlled trial, in which schools were randomly divided into two groups: a ‘control’ group who taught their usual computing lessons, and a ‘treatment’ group who delivered the Relevance intervention. The impact of the intervention was independently evaluated by the Behavioural Insights Team using data collected from pupils via surveys before and after the intervention. The evaluators also conducted lesson observations, pupil group discussions, teacher interviews, and teacher surveys to understand how the intervention was delivered and how it might impact girls’ attitudes towards computing.

“I feel a sense of achievement in computing when making your ideas a reality makes you proud of your creation, which is rewarding.” – Female pupil who took part in the Relevance lessons (report, p. 57)

Findings from the study

Although the impact evaluation of the study did not find statistically significant evidence of girls from schools in the ‘treatment’ group being more likely to choose GCSE Computer Science on a ‘yes/no’ basis, when pupils were asked instead to select the subjects they were likely to choose at GCSE from a list, there was a statistically significant difference in the analysis results: girls from schools in the ‘treatment’ group were more likely to choose GCSE Computer Science as one of their options than girls in the ‘control’ group. Whilst this exploratory finding is encouraging, the evaluators also cautioned that the way in which GCSE subjects are chosen in schools varies, and this question was only a simulation of one way in which subject choice takes place.

The results suggested that the intervention had a possible small positive effect on the perceived relevance of and interest in computing amongst girls, though this effect was not statistically significant. Pupil engagement with the lessons was high, particularly for practical elements, such as the app building and design. The evaluators noted that the limited impact of the intervention may have stemmed from some delivery challenges and time constraints, which in turn prevented the full implementation of the planned intervention in all schools in the ‘treatment’ group. However, teachers also reported that they enjoyed delivering the lessons.

“I will be adapting the resources and delivering the app project again. Overall, I think the programme was really good and allowed me to link app creation to careers.” – Secondary school teacher (report, p. 53)

The strategy used in this intervention was relatively low-cost and has the potential to positively influence female pupils’ attitudes towards computing. Therefore, the evaluators recommended extending access to the intervention resources and offering the lesson resources and training to key stage 3 teachers who would like to use them. As teachers reported that pupils would like to work together online to code their apps, the evaluators also suggested that this could be incorporated into the intervention in the future. They suggested that modifying the resources to allocate more time to creative and practical elements might also increase pupil engagement. Furthermore, the evaluators recommended using school administrative data on GCSE subject choices in future evaluations to help better understand the longer-term behavioural impacts of interventions aiming to encourage girls to study computing.

Find out more about the relevance of computing

If you would like to find out more about the Gender Balance in Computing research programme and be notified when we publish new findings, you can sign up to our newsletter.