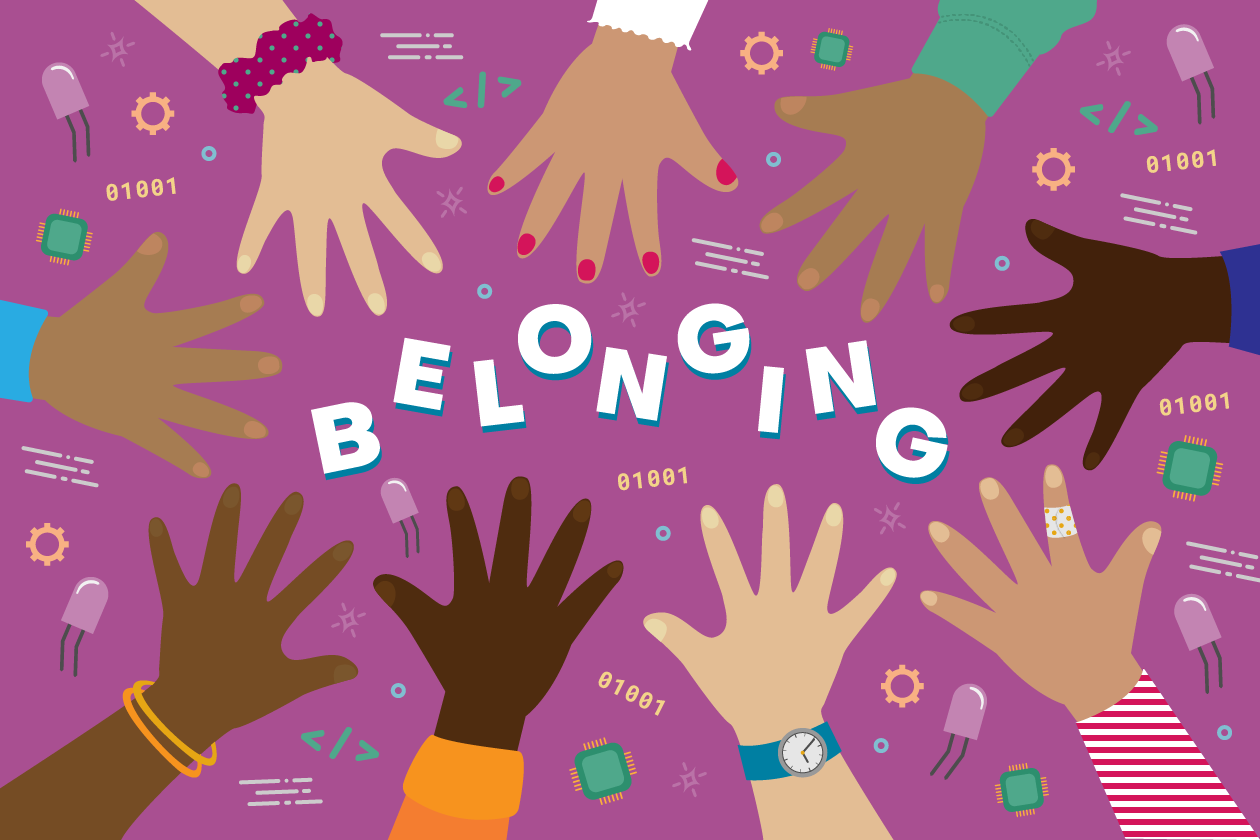 Today we are publishing the evaluation report for the next intervention from a series of interventions designed to address various barriers to girls’ uptake in computing. The intervention is part of a wider research programme called Gender Balance in Computing (GBIC). The report details a study examining two approaches to improving girls’ sense of belonging. This intervention was aimed at pupils aged between 9 and 10 years old and was delivered in schools between September 2021 and February 2022.

Why is it important for pupils to feel that they belong in computing?

The gender imbalance and lack of girls’ participation in computing start early in school and can be clearly observed later in secondary school subject choices. Several well-known and well-researched factors may impact girls’ engagement with computing. In addition, a limited sense of belonging, and insufficient perceived relevance of computing education in everyday life, may significantly impede their active participation. Prior evidence suggests that pupils who have a greater sense of belonging in computing are more likely to stay long-term in computing and associated STEM careers. Therefore, the main aim of this intervention was to address the negative impact resulting from a lack of sense of belonging in young pupils in general and girls in particular.

How to encourage the sense that girls do belong in computing?

Two distinct interventions were tested. WISE and the Behavioural Insights Team (BIT) served as the organisations primarily responsible for the overall design, delivery, and implementation of the interventions. Like previous GBIC trials, BIT also conducted an independent evaluation of this trial. While BIT acted as both an evaluator and implementers in this trial, the two teams worked separately from one another. The Raspberry Pi Foundation provided overall programme management and recruitment support across the interventions.

The study was a randomised controlled trial and had three arms: two groups of schools engaged in the different interventions and one group acted as the control. The first group experienced the intervention designed by WISE, “My Skills My Life”. Addressing girls’ self-identification, this intervention introduced young girls to female role models currently working in computing professions. The intervention consisted of ten lessons on the importance and relevance of STEM in their everyday lives and introduced them to women working in STEM careers.

In this intervention, the treatment schools had to conduct a ‘Real-Life Role Model’ session led by one female role model. The female role models volunteered to share their day-to-day experiences with the pupils while explaining some basic concepts related to their STEM job, to make computing and STEM more relatable to children. They received appropriate support and training from the schools and WISE also provided guidance on how to talk about their roles in a way that primary school pupils could easily understand.

"It has helped children aspire to bigger careers — most of them want to work in factories or just not work at all and go on benefits because that's what their parents do. This programme has opened their eyes to other things." Primary school teacher (report, p. 51)

“I think this initiative is great. The way it is being run and managed is also great. I felt quite supported and informed throughout the process.” A female role model (report, p. 46)

In addition to the lesson content and script to support teachers, WISE prepared a booklet containing profiles and information about 72 different female role models. This alternative was prepared prior to the intervention in order to mitigate any COVID-related challenges. Two schools that could not complete the ‘Real-Life Role Model’ session used these booklets to deliver a replacement lesson.

"Anyone can be anything they want." Female pupil (report, p. 51)

The second intervention implemented in the second treatment group was designed by BIT. It was titled “Code Stars”. This 12-week-long intervention involved a stand-alone, one-off lesson on artificial intelligence (AI), and a subsequent set of conversation prompts to help parents engage in discussions about computing on a weekly basis. The AI lesson was delivered by the teachers. The lesson was accompanied by a homework task for pupils to complete with their parents or carers. Finally, a follow-up lesson was conducted again by the teachers.

It was initially planned that BIT would send the conversation prompts to parents, but due to COVID-19-related challenges, teachers had to take responsibility for sending these out instead. This increased administrative load for teachers led to a lowered frequency of prompts, which varied from weekly to monthly. An additional action guide was made available to the teachers along with a list of evidence-based tips on different ways to engage girls in the computing classes.

The overall goal of implementing these two distinct approaches in two treatment groups was to increase girls’ sense of membership and acceptance in the computing community. The control group included schools that taught computing as usual. The impact of each intervention was evaluated through a randomised controlled trial using quantitative data from pupil surveys. In addition, qualitative data was collected at a small number of schools to understand the experiences of schools in delivering the interventions, through online teacher surveys, parent interviews, pupil surveys, lesson observations, and pupil focus groups.

Figure 2 below shows an extract from the Code Stars Action Guide shared with participating teachers.

The impact evaluation did not find conclusive evidence of either intervention having an impact on girls’ attitudes towards computing or their intention to study computing in the future.

In the My Skills My Life intervention, the pandemic caused a change in delivery format in some schools, meaning that the role models had limited opportunities for direct engagement and in-person interactions. More interactions with the role models could improve the impact potential of the intervention. Participating teachers appreciated the level of detail in the lesson plans.

Teachers from Code Stars participating schools repeatedly cited insufficient parental engagement and interest but at the same time they thought that additional AI-themed lessons may substantially improve girls’ interest in computing. The independent evaluators recommended reviewing the communication mechanism between teachers and parents, to ensure that the messages are sent consistently.

Overall, the My Skills My Life resources were very well-received by parents and pupils alike, and the Code Stars intervention showed a positive effect on pupils’ intent to study computing, which, while it was not statistically significant, was still encouraging.

This is the second intervention theme explored as part of the wider GBIC study. We will report the result of the remaining strands in due course.

Find out more about the free My Skills My Life outreach resource for secondary pupils.