Celebrating International Day of Women and Girls in Science 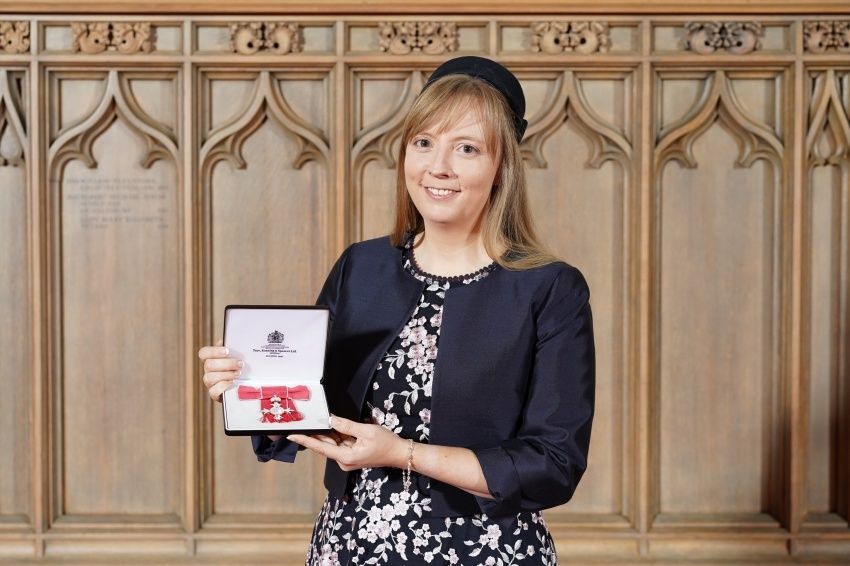 Please can you introduce yourself to our audience?

Hello, I am Carrie Anne Philbin and I work for the Raspberry Pi Foundation.  I’m responsible for the Teach Computing Curriculum online training courses, which are part of the National Centre for Computing Education (NCCE), and I’m the Foundation’s Director of Educator Support. In short, I’ve helped shape their educational programmes over the past six years.

Before joining the Raspberry Pi Foundation, I was a computing teacher, YouTuber, and author who focused on creating diversity and inclusion in the field of STEM.

Why did you become a computing teacher? What excited you about the field?

When I was younger I enjoyed arts and crafts and when my dad bought the family a Commodore 64, I loved the graphics I could make on it. Since then, I've always been drawn to computing and science.

I think when you're a girl growing up, you are pushed towards humanities or art-based subjects. However, I showed a lot of promise in maths and in computing. It wasn't until I was at university studying history that I truly started playing around with computers and exploring what they could do.

I didn't know there were specific computing jobs when I graduated, so I found myself in lots of technical support roles and became a full-time technician when I graduated. I then started working in schools and often found teachers coming to ask me to come into their classrooms to help explain computing terms they didn't understand. I then realised I could communicate computer science to students really well, which led to me becoming a full-time computing teacher.

What was the journey like going from ICT teacher to starting your YouTube Geek Gurl Diaries channel?

When you're teaching, you think a lot about how you can encourage young people to take part in the subject and I noticed in 2010–2011 that young people weren't using Google to search. They were using YouTube. I could see the impact that video was having on them.

I was doing some experimentation on my own personal YouTube channel where I was filming some aspects of my lessons, and then students could watch them outside of class, which they enjoyed.

I would also think “How can I encourage more girls to take the subject?” I thought if I interviewed women that work in the field, there would be a connection to what a career in tech could look like, but also if I documented my own things that I was making at home, they would see they could do it too. That is how Geek Gurl Diaries was started.

It started as a hobby and before I knew it, my videos had been picked up all over the place. I like to think I went from teaching hundreds of children to thousands of people around the world, which is amazing.

How did you start working with Computing at School and how did the #include program come about?

Simon Peyton Jones, who is the chair of the National Centre and the chair of Computing at School (CAS), saw my Geek Gurl Diaries and got in touch with me. He thought what I was doing was interesting and wanted to introduce me to other teachers.

After that, I met with a developer called Samantha Bale along with Laura Sach and Becky Franks, who both now work at the Raspberry Pi Foundation, to help come up with an idea for what #include could look like. We met virtually and decided we would create a subgroup in CAS to try and help teachers understand the issues around gender and to try to find ways to get girls more interested in computing.

Very quickly, we established a group and, once more teachers joined, we realised it was about more than just getting girls interested in computing; we started to think about ethnicity and disability as well. Before we knew it, we had five areas that we were looking at.

That was completely out of the blue. Crash Course was established by John and Hank Green, who are quite well known educational YouTubers. They started the channel about 10 years ago, focusing on providing crash courses in different topics.

They emailed me asking if I would be interested in hosting a video on computer science. From there, I met Brandon, one of their producers, online. They were really keen to have a female presenter and they had seen my Geek Gurl Diaries so it was the perfect fit. Then, in 2017, I made four trips to Indianapolis and filmed 40 episodes. It was Geek Gurl Diaries that opened the door, and Raspberry Pi that made it happen.

What challenges did you face when you started in computer science?

Mostly the challenges were societal and cultural. Computing has always been set up for white, middle class men. There's no getting away from it, as access to technology was a challenge. When I was growing up, it was people who had technology and people who could afford it that were in the field. My family couldn't afford it, so I used to go around friends' houses, and use their equipment.

But what this means is, the more interested you become in it, the more alien you are because you don't look like everybody else. When I was a technician working in schools, now I look at it with my modern eye, I realise that a lot of the time I was discriminated against. But when you're living it, you don't really know you're an oddity; you just sort of laugh along and kind of go along with it. But I look back now, and I think if anyone nowadays was treated how I was treated, I would do everything in my power to stop that from happening.

I definitely think I was treated differently because of being a woman, but it never stopped me. I just carried on. Now things are different: if you're passionate about what you do, everyone will believe in you. If you love what you do, nothing will ever stand in your way.

I have a lot of admiration for the young people in the Raspberry Pi community because they're trailblazers and they're not letting anything hold them back. They should inspire us every day to keep doing what we're doing.

Have you seen attitudes change towards women and girls taking part in computer science?

Definitely. In particular, over the last 10 years, there has been a movement within the industry as they can see that there's a problem. They want that problem to change, and organisations like the Raspberry Pi Foundation came about because men at Cambridge University looked around and said, “Well, why do we all look the same? Why isn't there more diversity?”

Attitudes have changed, people want there to be a diverse workforce, because the technology that has been created today has been created mostly by men, and therefore, that technology only serves that group of people. You know, even apps that are designed to track women's hormones have been designed by men, which brings the question how can it be a good app for me if it's not really been designed by a woman.

I think things have definitely changed, because we're seeing more women standing up and saying, “Yes, I do this”, and “I love this” and “These are the reasons why I'm not just waiting for someone else to do it”.

Also, computing feels more accessible than it was in the past. Now with the help of platforms like YouTube, TikTok, and Instagram, you can see people in other countries creating and developing all of these wonderful new things. You can go online at any time and be like, “Oh, that person is like me, and they are pursuing something in STEM”.

Whereas, when I was growing up, these things didn't exist. So what was visible to you was just the people around you in your school.

What needs to change to create an even split of males/females in STEM subjects?

It is changing gradually, and I think everyone is working towards more diversity and inclusion in the field. But the solution is not simple, just like the problem isn’t a simple one. It's multifaceted and it involves big societal change, and big societal change takes a long time to happen. I think the pandemic has helped to kind of push that change; however, so much still has to change. For it to happen there needs to be good education, good access to technology, and good access to role models for all races and genders. These aren't simple changes, they're really, really complicated.

Even now that computing is on the curriculum in England, it only gets one hour a week on the timetable at KS3. If you compare this to physics or maths, which get five hours a week, computer science is comparatively very low.

So there's no simple answer, because you can't ask students to do more subjects or give them more hours of work. I think the change will be slow and steady; however, there is still a lot of great work happening to support it, like our Gender Balance in Computing program.

You recently received an MBE. What was that like?

It was kind of mind blowing. It all happened during lockdown because it was for the Queen's Birthday Honours in 2020, but they weren't announced until May 2021.

It was quite overwhelming to think that anyone would even nominate me, let alone for the Palace to approve it and present it to me. I had to wait until November 2021 before I was invited for my investiture. The investiture itself was fantastically overwhelming, it was just incredibly astonishing to be in Windsor Castle under those circumstances. It was a lot for a little girl from Dagenham who is so far away from royalty. Her Royal Highness Princess Anne was a really good choice for them to put me with. She's the patron of WISE (Women In Science, and Engineering), so we had a really great conversation about Raspberry Pi. We spoke about what we were doing and talked about girls in computing.

It felt rewarding that she knew about what we're doing. While these honours are really great, they recognise individuals and what I would say is everything I've done, it's not been a solo effort. This MBE should recognise all of us, because it's our work that's being recognised, and not just me.

Do you have any advice for women and girls who would like to go into computing?

If you have an interest, don't let it dwindle. Push on all the doors because they will open for you. I think there is a lot of goodwill in the industry and although the environment might feel quite male dominated, a lot of those men are really keen to work with you and help you have a really great experience.

If you've got a passion for it, just keep going, because you'll get there and it's worth it in the end.

Lastly, do you have any programmes or websites you would like to recommend?
Coolest Projects is something that I tell everyone to check out. I think Raspberry Pi Clubs are great as well, but if you can't get yourself to a club right now, you can enter Coolest Projects and have that experience of digital making. I think it's such a valuable experience. It's one of the best things we do at Raspberry Pi as it is accessible to everyone across the world.